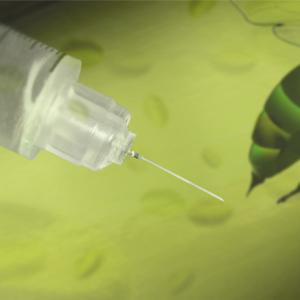 What is Bee Venom?

Poison extracted from bees. Has been used in the treatment of rheumatic diseases, especially multiple sclerosis and arthritis; can be applied directly or by intramuscular injection

Bees could hold the key to preventing HIV transmission. Researchers have discovered that bee venom kills the virus while leaving body cells unharmed, which could lead to an anti-HIV vaginal gel and other treatments.

Scientists at the Washington University School of Medicine in St. Louis found that melittin, a toxin found in bee venom, physically destroys the HIV virus, a breakthrough that could potentially lead to drugs that are immune to HIV resistance. A key ingredient in bee venom destroys HIV without harming other cells.

The researchers loaded the toxin, called melittin, onto nanoparticles fashioned with “bumpers” that normal, larger cells bounced off of unharmed. HIV is small enough that it fits between the bumpers and makes contact with the surface of the nanoparticles, where the bee toxin awaits. Melittin on the nanoparticle fuses with the viral envelope and ruptures it, stripping the virus’s shell.

The researchers attached melittin to nanoparticles that are physically smaller than HIV, which is smaller than body cells. The toxin rips holes in the virus’ outer layer, destroying it, but the particles aren’t large enough to damage body cells.

“Based on this finding, we propose that melittin-loaded nanoparticles are well-suited for use as topical vaginal HIV virucidal agents,” they write.

Theoretically, the particles could also be injected into an HIV-positive person to eliminate the virus in the bloodstream.

Because the toxin attacks the virus’ outer layer, the virus is likely unable to develop a resistance to the substance, which could make it more effective than other HIV drugs.

The Difference Between the normal drugs and HIV

The difference between this technique and existing anti-HIV drugs is that most drugs attempt to inhibit the virus’s ability to replicate, which the virus is able to evolve to evade. These drugs also don’t arrest the initial infection. But melittin attacks the virus’s inherent structure. There’s theoretically no way to develop adaptive evasion responses to that.

The antiviral therapy has implications for areas rampant with HIV, to be used by women in a vaginal preventative gel that prevents the initial infection.

Benefits of the Treatment

Treatments could also be developed for drug-resistant HIV infections, to be delivered intravenously and potentially clear the blood of the infection.

There is also the possibility for this treatment being useful for couples in which one member is HIV-positive but who want to have a baby together.

The nanoparticle itself was developed years ago for an artificial blood experiment, but it was lousy at carrying oxygen.

It’s proving its worth now as a promising drug-delivery system instead: the particle can be loaded to target all kinds of infections.

Melittin attacks double-layered membranes, like the kind many viruses use, indiscriminately, which also means that other viruses like Hepatitis B and C, which rely on a protective envelope to evade the body’s immune system, could be slayed by this potent little toxin. Researchers say the nanoparticles are easy enough to make that they can be reproduced for clinical trials soon.