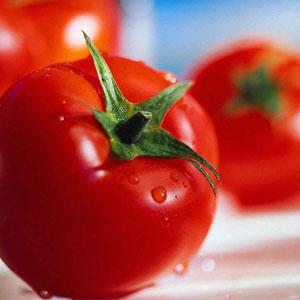 For women who might be awaiting their post-menopausal state with trepidation pertaining to detection of breast cancer, the good news round the corner is that inclusion of tomatoes in daily diet has proved to be an effective hindrance in the development of this disease. Consumption of tomatoes in sufficient quantities causes a significant increase in the level of hormone adiponectin which plays an instrumental role in regulating sugar and fat levels in the blood.

Research has revealed that more than 12% of women in USA are susceptible to developing breast cancer regardless of age and other factors and this risk increases manifold as the woman approaches her post-menopausal milestone. As women approach their 50th birthdays, their BMI, meaning Body Mass Index, surges and this causes carcinoma of the breast to set in. The strong correlation between the two can be adjudged by the fact that post menopause one in every 42 women is prone to its incidence.

While the war against breast cancer has been waging over the years and significant breakthroughs have been achieved its link to tomatoes is a relatively recent discovery. To prove this point beyond doubt, scientists conducted an experiment wherein 70 women in their post-menopause phase were selected and asked to follow a tomato-rich diet for the first 10 weeks. Subsequently, after a gap of two weeks they were put on a diet that was rich in soy protein for the next 10 weeks.

In both cases, the amount of nutrient was regulated – the amount of tomatoes was decided upon so that the body received 25 milligram of lycopene, an antioxidant, at the end of each day while the quantity of soy protein was fixed at 40 grams per day. Testing conducted at the end of the study revealed that a diet enriched with the goodness of tomatoes caused a 9% rise in the level of adiponectin particularly in case of women having a lower BMI. On the other hand, a diet concentrated in soy protein caused the levels of adiponectin to drop thus increasing susceptibility of women to become obese and resistant to insulin.

Thus, it was conclusively proven that by including tomatoes and their derivatives in their diet, women would not just benefit from intake of various nutrients and phytochemicals but also manage to keep obesity at bay through maintenance of optimum weight. Further benefits include reduced risk of heart stroke and prevention of prostate cancer development.