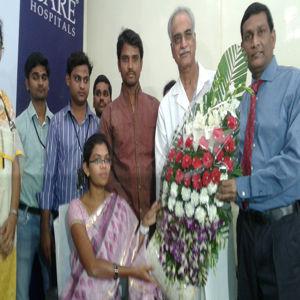 Hyderabad, 30th Oct: Mrs. Sirisha, (25 years old), a resident of Injapur village, Ranga Reddy district, works as a science teacher in a private school. Ultrasound scan during her pregnancy showed heart defect in the baby (fetus). She also had undergone minor surgical procedure for gynecological problem to prevent abortion. The couples were referred to our centre for confirmation of the heart defect and counseling at 23 weeks of pregnancy.

Care's team of doctors performed fetal echocardiogram and found major heart defect in the fetus. There was severe obstruction in the aortic valve resulting in failure of pumping of left ventricle to the body. We followed her every week with fetal heart scan. The heart started showing changes of further damage in the form of left ventricular pumping failure, leakage of mitral valve and shrinkage of left sided heart chambers.

The problem was thoroughly discussed with the family and our team of doctors. Relief of valve block at this stage would have prevented further shrinkage of heart chambers.

Mrs.Sirisha, being a science teacher, understood the heart and the circulation very well and requested us to do the best possible procedure to the fetus. There were many hurdles to the procedure.

The procedure was first attempted in the 26th week of pregnancy. However, it could not be done due to the unfavorable fetal position for a long time. The couples were disappointed at the failure of the procedure but the team of specialists re-discussed about changing the strategy. Mrs. Sirisha was called after one week for re-attempting the procedure with a new strategy. The team waited for a good fetal position for the procedure. Mother was given general anesthesia. Then quickly, fetus was given intramuscular injection in the thigh for fetal anesthesia to avoid fetal movement during the procedure. Motherâ€™s abdomen was entered using a needle and the needle was advanced into the uterus, the babyâ€™s chest and finally into the left ventricle. With an appropriate balloon and wire, the aortic valve was dilated to relieve the valve block. The baby was given medications to maintain heart rate and circulation.

She was discharged after 2 days. She is now re-admitted again for assessment. Fetal heart scan showed partial relief of the aortic valve obstruction. There is no mitral valve leak now.

Speaking on this occasionâ€ Dr.K Nageshwar Rao, Chief Pediatric Cardiologist said â€œWe are really happy by saving a life. This kind of procedure is first of its kind in India. Fetal Procedure is one of the latest technique which is used to treat birth defects in the fetuses. He also said â€œSirisha is advised to undergo childbirth at a tertiary care centre. The baby would need another heart procedure after birthâ€.

Speaking on the occasion Dr B Somaraju Chairman of CARE Hospitals said that team approach at CARE has always helped us to extend best to the patients and congratulated the pediatric cardiology team for their efforts.