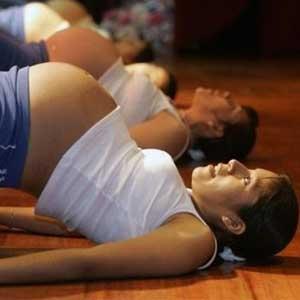 What could be more important than a newborn's good health for an expecting women? But what is it that could be done to welcome your bundle of joy hail and healthy in this world. Well experts argue that a pregnant lady’s physical fitness paves way for her babies metal stability. According to few researchers in Canada, if an expectant mother works out (exercises) for at least 20  minutes for about thrice a week, can give their newborn a head start for a cerebrally active brain.

Researcher Dave Ellemberg, a professor at  University of Montreal, along with his colleagues, partnered with CHU Saitne-Justin Childrens hospital to conduct the research. As per their research report presented at the Neuroscience 2013 congress (San Diego) CA , it was stated that a newborn child's brain development could be enhanced by following an exercise regimen during the course of pregnancy.

Prof Dave Ellemberg also stated that, earlier studies revealed that such comparable results have also been found in animals, however they have conducted their first trial on human to show how exercise during pregnancy can benefit the overall brain development in a newborn.

Prof Daniel Curnier, who was also a part of the research said, “Based on the fact that regular exercise has proved to be beneficial for a better mental health in adults, we took our move to prove that it could be equally beneficial for a to-be-born child by their mothers actions”.

To start with the researchers randomly categorized the women who were in the beginning of their second trimester in two groups. One group was asked to perform medium-intensity cardio exercises thrice a week for at least 20 minutes and the women in the second group did not perform any physical exercise.

After the women delivered their babies, the team analyzed the brain activity of each newborn between 8 to 12 days of age, by using the electroencephalography methods that helps in recording the electric activity of their brains. The researchers placed almost 124 soft electrodes on each of the infants head and then waited till they fell asleep. They then measured the auditory memory by recording the unconscious response of these kids to both new and repeated sounds.

Elise Labonte-LeMoyne PhD, who was a part of the research, revealed their findings saying, “The results prove that the infants born to the mothers who fell in the first category (performing physical exercise) showed a mature cerebral activation, in comparison to those mothers who didn't exercise”.

The team also stated that they will continue their study further by conducting their tests on these kids once they turn 1 year old to see if these developments would benefit them for a longer duration.