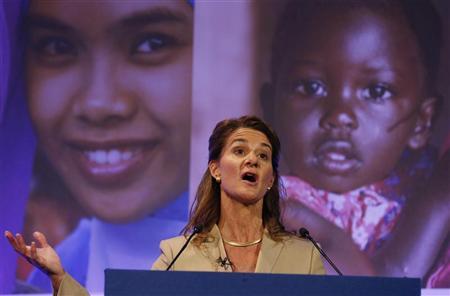 (Reuters) - Melinda Gates has pledged $560 million as part of a campaign to expand access to contraception for women in some of the poorest countries in the world. The funding commitment was unveiled on Wednesday at the London Summit on Family Planning alongside pledges totaling $4.3 billion from the British government and leaders from African nations wrestling with the health and social problems brought on by high rates of unplanned pregnancy. The summit launched a program to extend family planning services to 120 million women out of an estimated 220 million around the world who want, but cannot get, reliable access to contraception by 2020. Supporters of the campaign estimate that this year will see 80 million unintended pregnancies in developing countries. They say 800 women die every day as a result of pregnancy-related complications - the leading cause of death for teenage girls in the developing world. "When I travel and talk to women around the world they tell me that access to contraceptives can often be the difference between life and death," Gates said.