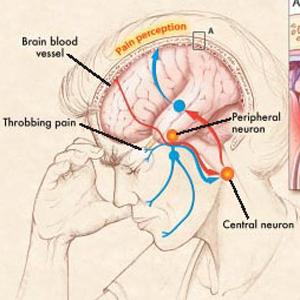 A recent study revealed that migraine is caused when there is an inconsistency in the blood supply to the brain due to the incomplete network on brain arteries.

A team of researchers exclusively studies about the “Circle of Wills” which is recognised as an important set that connects the major arteries of the brain and controls the blood flow to the brain arteries. They carried on their research of three groups of people:

They measured the flow of blood in the brain of the individuals, with the help of magnetic resonance angiography and MRI method known as ASL (arterial spin labelling). It was found out that almost 73% of the individuals suffering from migraine with aura and 67% of the ones who had migraines without aura had a variation in the brain arteries. In comparison to the ones with no headache it was found that only 51% of them had incomplete network of brain arteries.

One of the researchers Dr.Cucchiara said that, “People suffering from migraine due to incomplete brain arteries are the ones who are born with such variations. It isn't something that happens during the course of their growth”. He also stated that, only 50% of the normal people have complete Circle of wills.

Though it is found to be just one of the issues connected with the migraine of aura, the researchers believe that study will certainly help in giving personalized treatments to the ones suffering from migraine.