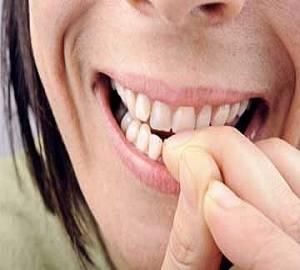 The behaviour of biting your nails might soon be classed as more than just an innocuous habit. It may soon be classified as a full-fledged obsessive-compulsive disorder, experts say.

Obsessive compulsive disorder is a condition where a person keeps having obsessions (unwanted, repeated thoughts) and compulsions (behaviors where they feel like they have to do something), according to the A.D.A.M. Medical Encyclopedia. OCD can manifest as the need to count everything, being overly afraid of germs or uncleanliness, or having to check things over and over again to make sure they've been done.

Even though nail-biting is being proposed to be given this new classification in the new DSM, that's not to say that everyone who bites their nails will be diagnosed with OCD. The occasional chewed nail isn`t an indication of the disorder.

"As with hair pulling and skin picking, nail biting isn't a disorder unless it is impairing, distressing, and meets a certain clinical level of severity," Dr. Carol Mathews, M.D., a psychiatrist at the University of California, San Francisco, told Women's Health. Most people who bite their nails don't fit in this category, which is only comprised by "a very small minority of people."

The American Psychiatric Association is preparing to change the designation of nail biting from `not otherwise classified, to `obsessive compulsive disorder` (OCD) in its upcoming issue of the Diagnostic and Statistical Manual of Mental Disorders.

Nail chewing is considered severe when the habit becomes destructive? when it impairs use of the hands or leads to repeated infections.

Sometimes a nail-biter`s hands and fingers can become infected, but more often, the habit leads to an increased risk of contracting colds and other illnesses because it encourages the spread of germs from the nails to the lips and mouth.

Nail biters looking to quit their addiction may find they are less inclined to stick their fingers in their mouths if they put lemon juice or hot sauce on their digits.