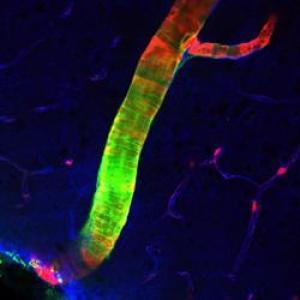 Scientists have discovered a system that drains waste products from the brain. The finding may reveal new ways to treat neurodegenerative disorders like Alzheimer’s disease.

Our bodies remove dead blood cells and other waste through a network of vessels called the lymphatic system. The brain, however, has a different method of keeping clean. Cerebrospinal fluid cleanses brain tissue. But how the fluid moves through the brain and clears waste wasn't well understood. Until now, scientists could only study brain tissue in animals that were already dead. They thought nutrients and waste were transported through the slow process of diffusion.

In a new study, a research team led by Drs. Jeffrey Iliff and Maiken Nedergaard at the University of Rochester Medical Center used a method called 2-photon laser scanning microscopy to analyze the flow of cerebrospinal fluid in living mouse brains. This new technology allowed the scientists to study the intact brain in real time. They injected tracer molecules into the subarachnoid space, a cerebrospinal fluid-filled cavity between the membranes that cover the brain and spinal cord. Their work, funded in part by NIH's National Institute of Neurological Disorders and Stroke (NINDS), appeared in the August 15, 2012, issue of Science Translational Medicine.

To their surprise, the scientists found that the tracer molecules flowed along a series of channels surrounding blood vessels. In the brain, blood vessels are surrounded by cells called astrocytes. These cells have projections called end feet that wrap around arteries and veins like a layer of piping. It was through this pipeline that the molecules traveled. The system uses pressure to push fluid through the brain. It's a much faster and more efficient way to carry away waste than diffusion.

Astrocytes are a type of glial cell—a class of cells that support neurons in the nervous system. The research team named this new system the “glymphatic system” because it is similar to the body's lymphatic system and is managed by the brain’s glial cells.

“Increasing the activity of the glymphatic system might help prevent amyloid deposition from building up,” says Iliff, “or could offer a new way to clean out buildups of the material in established Alzheimer's disease.”

“This work shows that the brain is cleansing itself in a more organized way and on a much larger scale than has been realized previously,” Nedergaard says. “We're hopeful that these findings have implications for many conditions that involve the brain, such as traumatic brain injury, Alzheimer's disease, stroke and Parkinson's disease.”