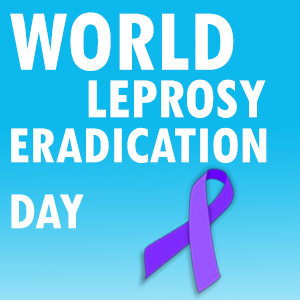 January 30th is remembered as World Leprosy Eradication day across the globe.

Leprosy is known to humanity for over 5000 years. Also referred to as Hansen's disease (HD), this chronic infection still prevails among a sizeable population of the world.

Once considered to be highly contagious, the patients were treated with Mercury but with little result. However, modern science has blessed us with the cure to this fatal disease. The WHO released figures recently stating that a whopping 16 million people across the globe have been cured of Leprosy in the last 10 years. The WHO provides free treatment to lepers across countries.

This disease is wide spread among those living in endemic areas under deplorable conditions such as unhygienic bedding, contaminated water, unclean food, or other diseases that have a bearing on the immunity system.

Though genes do have a link to the susceptibility of this disease, Studies have shown that that around 95% of the worldâ€™s population is naturally immune. Doctors state that it takes usually 3-5 years for the bacteria to incubate in the system before visible physical signs start manifesting.

Leprosy Mission Trust of India is the prime organization in India that works with individuals and communities that are socially disadvantaged by leprosy by helping them regain the respect in society by living a normal life and also get cured.

Although there is prevalence of forced quarantine of patients across the globe, it is not necessary as proper medications are available in the modern day. Many leper colonies exist in todayâ€™s world in countries such as India (where there are still more than 1,000 leper colonies) China and Japan. It is up to us to remove the darkness and myth surrounding this curable disease.

How To Find A Great Chiropractor Near You?

IHU: All You Need To Know About The New Variant Of Covid

What Is Omicron Variant And How It Affects The Body?

Difference Between Back Pain and Kidney Pain

Precautions To Be Taken After Fistula Surgery